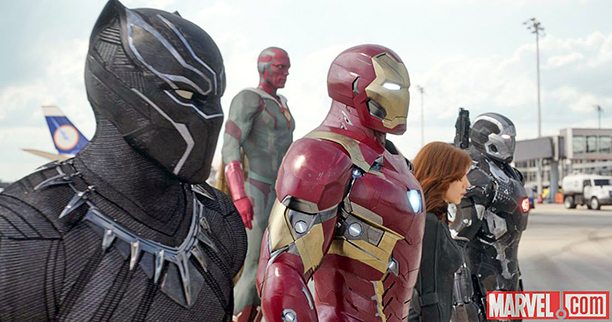 It is easy to think of Captain America: Civil War as the “other” movie about traditionally friendly superheroes coming to blows amid the mass-media frenzy surrounding Batman V Superman: Dawn of Justice. But while Zack Snyder’s dark super-powered beat down is shouldering the gargantuan task of launching a full-scale DC Cinematic Universe, the Russo Brothers’ follow-up to The Winter Soldier carries weighty expectations of its own. The film is not only tasked with adapting one of modern Marvel Comics’ biggest and most-controversial stories into the Marvel Cinematic Universe, but it must also deliver the kind of character growth and continuity reshaping that (in the minds of some fans) was lacking from Avengers: Age of Ultron.

The film isn’t due out until Marvel’s traditional “summer-kickoff” spot in May, but the studio isn’t looking to let anyone forget what’s coming. As such, Marvel has released a full set of new behind-the-scenes and high-res images to the web.

Black Panther (Chadwick Boseman) sides with Iron Man (Downey Jr.) on the superhuman regulation issue, due in part to his distaste for Captain America’s comrade the Winter Soldier (Stan).

Stan as Bucky Barnes aka the Winter Soldier.

Johansson bounds across a series of cars as Natasha Romanoff aka Black Widow.

Black Widow’s stance on superhuman regulation is conflicted due to her loyalty to Captain America and her innate desire to answer to the people.

Based on the groundbreaking-but-still-controversial event series from Marvel Comics, Civil War finds members of The Avengers and other super-powered individuals divided by a government initiative to register and regulate their activities. The result of such an effort finds onetime Avengers leader Steve Rogers taking up arms with those opposing the registration when his best friend Bucky Barnes (recently revealed to have been transformed into the cyborg assassin Winter Soldier) becomes embroiled in the backlash against their kind.

Details of the film’s allegedly major plot-turns are being kept top secret, but longtime Marvel fans definitely recall the original Civil War ended with a Marvel Universe so bitterly divided it was left vulnerable to the destruction of Secret Invasion and World War Hulk. It also left Captain America in the tricky position of being dead (though he got better). Many MCU fans are already bracing themselves for the possibility that this version may conclude under similarly dire circumstances, with rumors of a radically reconstituted version of The Avengers set to convene for the first of two Infinity War movies.

Fueling speculation about the possibility of major characters meeting a final (or as final as it gets for superheroes) end is the fact that at least two upcoming Marvel features involve characters associated with death and/or resurrection. For starters, Doctor Strange is frequently tasked with traveling to the afterlife to interact with or “bring back” lost comrades, and Thor: Ragnarok purportedly involves the God of Thunder visiting Hell itself. As speculated by many fans, it’s not implausible to imagine Civil War could end with one or more significant characters “dying” in order to sit out first Infinity War installment only to be dramatically revived for Part II.