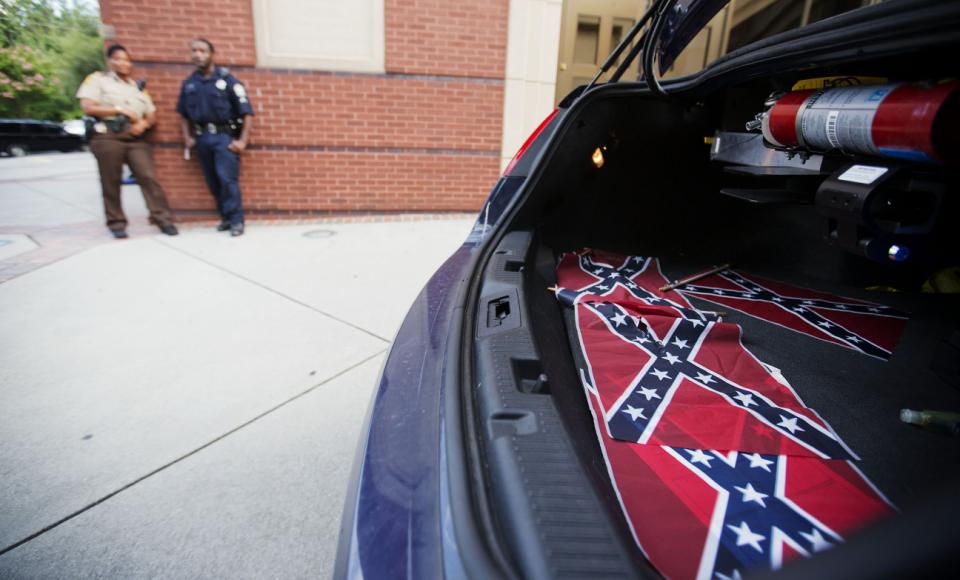 It was the latest provocative act involving the Civil War-era symbol since nine black church members were gunned down during Bible study in South Carolina, and it happened in the heart of an area devoted to the slain civil rights leader, near his birthplace, his crypt and a center devoted to preserving his legacy.

An officer from the Atlanta FBI’s joint terrorism task force was on the scene “to better determine if any specific threats were received” and to provide support to Atlanta police, FBI Special Agent Steve Emmett said in an email.

“This act by a cowardly and misguided individual or individuals is provocative to say the least. It ought to get the attention not only of black people but of freedom-loving people,” he said. “To place Confederate flags on the campus of Ebenezer Baptist Church after this horrific act in Charleston, in the wake of all this happening in our country, whatever the message was, it was clearly not about heritage, it was about hate.”

King preached at Ebenezer Baptist Church on Auburn Avenue, once a bustling center of commerce for Atlanta’s African-American businesses and residents. The area is home to the historic church and a new church building where the congregation now meets and where the flags were placed. Nearby is the Martin Luther King Jr. Center for Nonviolent Social Change, and all of those buildings are just a short walk from the home of King’s grandparents, where he lived for the first 12 years of his life.

The flags weren’t stuck in the ground but instead laid flat. One was placed near a bell tower under a poster that said: “Black Lives Matter.” The slogan, which has been spray-painted on Confederate monuments across the South this summer, has become part of a movement of civil rights supporters who say police treat blacks unfairly.

Two former Georgia prosecutors said it might be tough to prosecute the people responsible.

“It was certainly divisive and not acceptable behavior the way it was done, but I cannot find a criminal act to it,” said Bob Keller, the Clayton County district attorney for nearly three decades until 2004.

Ken Hodges, who served as Dougherty County district attorney from 1997 to 2008, said a charge of vandalism to a place of worship might be possible.

Warnock, the church pastor, said black clergy from around the country were gathered at Ebenezer on Thursday to discuss the role of black churches in social justice issues, including mass incarceration. The placing of the flags only strengthens their resolve, he said.

Superintendent Judy Forte of the National Park Service said her office at the King historic site received a threatening phone message the day before the shooting at the South Carolina church. The message was rambling and “very alarming and they did mention coming here to the historic site,” she said. There was no indication that was connected to the flags.

At some point within the last two years, a Confederate battle flag was placed at the tomb of King and his wife Coretta across the street from the church, said Forte, who couldn’t recall exactly when that happened.

“It was disturbing and sickening, but unfortunately not terribly surprising,” Warnock said of the latest incident. “We’ve seen this kind of ugliness before.”