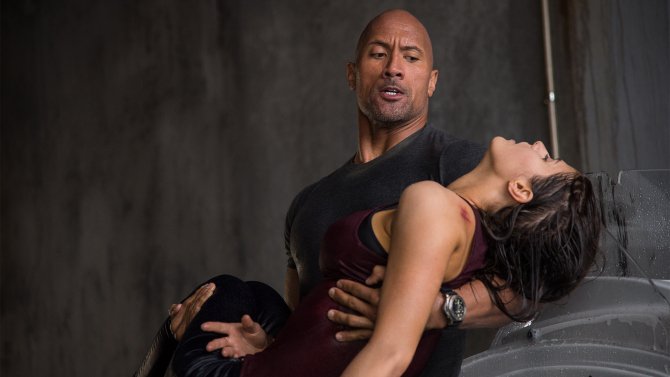 The 21st century answer to Irwin Allen’s disaster films of yore is on pace to debut to $40 million domestically when it bows in 3,777 locations. The Warner Bros. release deploys the latest CGI razzle dazzle in the service of depicting a massive earthquake that threatens to turn much of California into ocean bottom. The best special effect at its disposal may be Dwayne “the Rock” Johnson, a reliable draw at the box office in films such as the “Fast and Furious” and “G.I. Joe” movies.

In those films, however, he was part of an ensemble cast, so this will be a real test of Johnson’s ability to open and carry a movie on his prodigious back during the most competitive time of year. Village Roadshow Pictures co-financed and co-produced “San Andreas” with Warners to the tune of $110 million.

The disaster genre has been dormant of late, with more recent efforts such as “Into the Storm” and “Poseidon” failing to generate much excitement at the multiplexes. It’s also always difficult to launch an original film during the summer, a time of year usually dominated by sequels and comic book movies. However, “San Andreas” may benefit from an easily identifiable marketing hook through the recognizable fault that lends its name to the film.

“When you say that title people instantly understand what they’re in for,” said Paul Dergarabedian, senior media analyst at Rentrak. “People are fascinated by this kind of thing — this type of end of the world stuff.”

Internationally, the film is set to open in 60 markets today and 13,000 screens. The rollout includes such major territories as France, Germany, Russia, Brazil, the United Kingdom, Mexico and Australia. “San Andreas” debuts the following week in seven additional territories, including China and Korea.

The weekend’s other new wide release, Sony Pictures’ “Aloha,” is positioned as a counterprogramming option that will appeal to women. The Cameron Crowe romantic comedy made headlines last winter during the Sony hack, when emails were leaked from Amy Pascal in which the deposed studio chief disparaged the film and its script.

Despite the brush with ignominy, “Aloha” represents only a modest financial risk for the studio. The film cost $37 million to make. It also boasts a likable cast in Bradley Cooper, Emma Stone and Rachel McAdams that could draw crowds for whom Pascal’s name is likely to elicit blank stares. The movie is on track to open to $12 million, although Sony is being more conservative and predicting an opening in the $8 million to $10 million range.

Despite overseeing film classics such as “Say Anything” and “Jerry Maguire,” Crowe has seen his commercial appeal wane during the last decade, following box office disappointments like “Elizabethtown” and the less-than-stellar “We Bought a Zoo.”

The summer box office had been proceeding at a furious clip until last weekend’s Memorial Day holiday. Disney’s “Tomorrowland” underwhelmed with a $41.7 million debut, sending the overall box office for the four-day holiday to its lowest numbers since 2010. However, the box office is up about 3.6% year-to-date. Ticket sales will likely give back some of those gains, because revenues will have trouble matching the same weekend last year when “Maleficent” debuted to nearly $70 million.