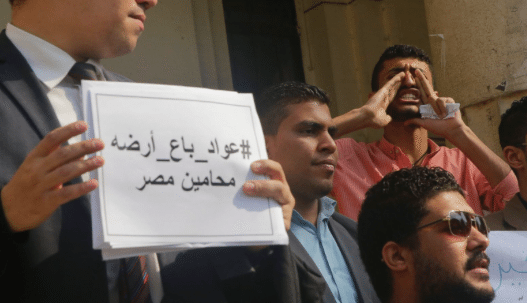 Protests erupted across Egypt after President Abdel-Fattah el-Sissi renounced possession of two Red Sea islands and gave them to Saudi Arabia. Protesters chanted “leave, leave!” directed at el-Sissi, this first ripple of protests against the president since he was elected in 2014.

Police first suppressed the wave of protesters in Cairo’s twin city of Gize, where groups have gathered at two mosques to join forces and march toward Tahrir Square. Many carried signs reading, “Land is Honor” and denouncing the surrender of the islands. Others chanted, “The people want the fall of the regime” and “Down with military rule!”

More than 80 people were taken into custody in Cairo, Giza and the Mediterranean port city of Alexandria, security officials said.

All unauthorized protests in Egypt are illegal under a law adopted in late 2013 and security forces have been known to inflict substantial bodily harm in the past. Protesters set April 25 — a holiday marking the restoration of Egyptian control over the Sinai Peninsula after years of Israeli occupation — as a new date for the second wave of protests.

“Another demonstration by nearly 2,000 protesters gathered outside the Press Syndicate in downtown Cairo, a few meters away from lines of policemen in full riot gear and backed by armored vehicles who sealed off surrounding streets.” According to the Associated Press. The protesters there chanted, “They sold our lands to the Saudis” and “The islands are Egyptian.”

The recent protest in Cairo was similar to the 18-day uprising in 2011 at Tahrir with regard to the environment of the rally. Some protesters Friday wrapped themselves in Egypt’s black, white and red flags, others wrote on the asphalt “erhal!” or “leave!” Small groups sang patriotic songs and at one point everyone sang the national anthem

“No matter how bad the Muslim Brotherhood were, they could not be worse than the military and remnants of the Mubarak regime we have now,” said protester Ali Mohiey, a 24-year-old student from Cairo. “Today, there is no Brotherhood or secularists. It’s a day for one people against the sale of our land, oppression and detentions.”

“If we give up the lands now, there will be more future concessions for (el-Sissi) to stay in power,” said another protester, Alaa Morsi, reiterating a widespread belief that el-Sissi essentially “bartered” Egyptian territory for Saudi financial aid to “shore up” his rule.

After nightfall, police fired tear gas and chased protesters through Cairo’s downtown streets. Some protesters threw firecrackers at the police. On social networking sites, activists wrote down the safest locations to hide from the police. Witnesses said that the police also hit protesters with batons when they got out of hand. 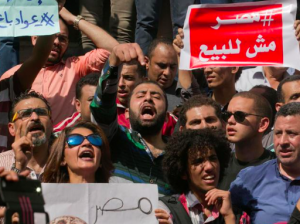 Many protested because they felt as though the deal was secretive and poorly timed. It was announced during a recent visit by King Salman, the Saudi monarch, who pledged billions of dollars of loans and investment to Egypt. Critics and even some former el-Sissi supporters said it was a “desperate and humiliating territorial sell-off.”

“He should have told us before the deal,” said 28-year-old lawyer and protester Rania Rafaat, who was carrying a banner that read, “el-Sissi sold his land, leave.”

El-Sissi has vehemently defended the deal, trying to ease the tensions over this past week. “We did not surrender our rights, but we restored the rights of others,” he said on Wednesday. “Egypt did not relinquish even a grain of sand.”

Although the protest was somewhat small, it occurred during a time of political turmoil and increasing tensions over el-Sissi’s 22-month term. El-Sissi responded to the protests by jailing dozens and killing hundreds in street clashes with police.

Despite the recent protests, el-Sissi still maintains a relatively large fanbase. At a small rally Friday in Alexandria, dozens of supporters carried posters with photographs of the president and chanted, “We love you, el- Sissi!”

The calls for the Friday protests in Cairo triggered heightened security in Tahrir Square, shutting down the subway station there and positioning dozens of police vehicles in the area.

Related Topics:EgyptNewsSaudi Arabia
Up Next