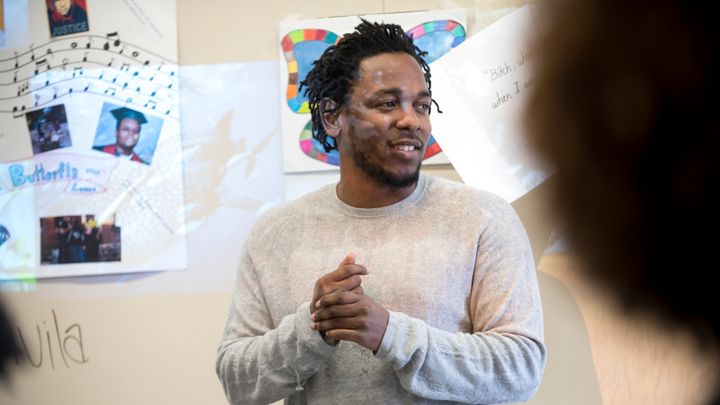 On Monday, just around 12 hours after he featured Summer Stick a couple of miles west, Kendrick Lamar touched base at High Tech High School in North Bergen, New Jersey, for a day of listening to poetry, freestyling with teenagers and leading a forward-thinking assembly that even had its own official hashtag.

In Spring, Innovative educator and verse club coordinator Brian Mooney had composed a blog post about utilizing the rapper’s discriminatingly acclaimed late album To Pimp a Butterfly to analize Toni Morrison’s The Bluest Eye. The following month, he posted a follow-up including reactions written by his feshman English students. Both posts went viral, in the end coming to Lamar, who requested that his manager reach out to Mooney and set up a visit.

“I was intrigued that somebody other than myself can articulate and break down the concepts of To Pimp a Butterfly almost better than I can,” Lamar explained during a break, referring to Mooney’s original blog post. “That let me know he’s a true lover of music.”

He was considerably more awed by the students.

“I didn’t think I made [To Pimp a Butterfly] for 16-year-olds,” he continued. “I always get, like, my parents or an adult saying, ‘This is great, you have a message, you have themes, you have different genres of music.’ But to get a kid actually telling me this, it’s a different type of feeling, ’cause it lets me know that their thought process is just as advanced as mine, even if I’m 10, 15 years older.”

Lamar’s day started in Mooney’s classroom, where the educator’s poetry club and English class met their visitor and showed some of their work. The first student read a poem about the battles he confronts as a dark skinned South Asian, and two others took after with a joint piece called “What the Media Taught Us.” Lamar giggled when they came to the line “You picked the wrong butterfly to pimp” and huge upped both works. “They got heart, they got judgment, they got punchlines,” he said, unmistakably moved.

After another performance, Lamar took questions from the class, the students getting some information about topics as specific the development of the rapper’s narrating and as deep as his collaborations with jazz saxophonist Kamasi Washington. Lamar identifies with the associations between diverse types of narrating and reviewed his years as the calm child in the back work area: In grade school, he was the first child his teacher had ever heard utilize “audacity,” and by then she anticipated he would some time or another turn into a wirter. In advance, the children shaped a circle and started to rhyme more than a beat playing off Mooney’s mobile phone.

In spite of the fact that the evening rotated around the diagram topping visitor, Lamar never addressed, and motivation went in both headings. This was Mooney’s goal when he set the calendar, yet he didn’t need to disclose anything to the 27-year-old, who landed at the school expecting precisely that. “Something for me considerably greater than tutoring is truly tuning in,” the rapper told columnists while whatever remains of the school held up in the field house. “When I do that we have a smidgen greater association than me being Kendrick Lamar and you being the student. It’s verging on like we’re friends. . .I’ve met children that let me know my own particular blemishes, and I needed to kick back and check myself and reroute certain endeavors that I was heading to.”

Inside the fieldhouse, Mooney acquainted Lamar with whatever remains of the student body, retelling the backstory (the students thundered when he said becoming a web sensation) and clarifying that “hip-hop ed” is an approach to help students discriminatingly draw in with writings, with the world and even with hip-hop. More cheers.

Poetry club member Aaleah Oliver conveyed her peers to their feet with her lyric “Out of many, One.” From that point, a board — Lamar, education activist Jamila Lyiscott, hip-hop education advocate Christopher Emdin, the school’s assistant principal Allyson Krone and a recent high tech alum — held short discussions motivated by more study work.

Ben Vock read a poem inspired by Lamar’s “Mortal Man,” interrogating the subliminal reasons for alarm and judgments he was taught to make as a white adolescent. “The hardest thing for an artist to is look in the mirror,” the rapper let him know. “That is the thing that I was attempting to do with To Pimp a Butterfly.” Lamar was just as awed by Sade Ford’s “It Takes a Village to Raise a Butterfly,” which migrated “These Walls” in northern New Jersey. “You just remixed the entire joint!” he shouted.

After an essay and a dance routine, Lamar and Mooney came back to the stage, teasing the likelihood of a surprising finale. “I know he simply performed at Summer Jam, so I get it relies on upon how terrible you need to hear him,” the teacher said. Lamar grinned and shrugged as shouts filled the building. He requested that the students yell the name of the song they needed, yet the commotion was still excessively. A couple of minutes went before the DJ settled on a fitting track, “Alright,” and the school day finished with a stuffed field house repeating the chorus: “We gon’ be alright.”