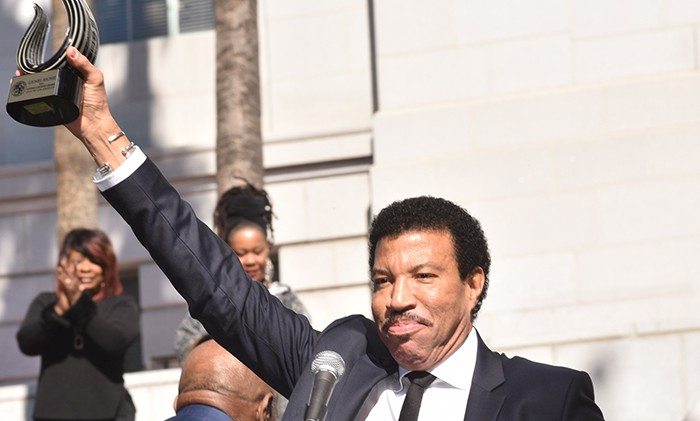 Mayor Eric Garcetti, who introduced Richie in the council chamber, said the entertainer has not only distinguished himself through music, but also with his philanthropy, often done “when no one’s around, and no one’s looking.”

Richie, who began his career as a member of the Motown musical group Commodores, started his acceptance speech by noting that one of his favorite part of the award is that it acknowledges he is “living.”

Richie, who grew up in Tuskegee, Alabama, said he benefited from being raised not only by attentive parents, but also by a “fabulous village” of people, which spurred his efforts to reach out to young people exposed to gangs and other destructive influences.

He related a story of his father reacting with anger over his career path when he and his fellow Commodores bandmates announced, “We’re the black Beatles, dad, and we’re going to take over the world!”

Decades later, he said he became similarly agitated when his own daughter, Nicole, told him she would star in the reality show “The Simple Life” opposite Paris Hilton, in which “we’re going to play some spoiled rich girls from Beverly Hills and we’re going to spoof the rest of the world.”

“And I used the exact same words my dad used,” said Richie, who declined to repeat the evidently colorful language.

In both instances, he — and later his daughter — were able to come back a few years later to say, “I told you so,” Richie said.

DMX Found Unconscious Near Death Due to Overdose in Yonkers