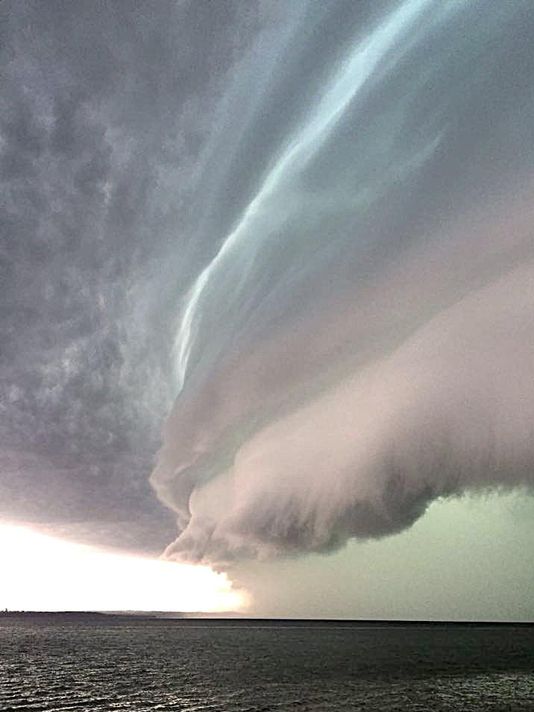 Thunderstorms moved into Metro Detroit late Sunday, with wind gusts of up to 60 mph and making roads slick from the rain and producing flash flooding, according to the National Weather Service.

The northbound Interstate 75 ramp at eastbound Interstate 94 was closed early Monday due to flooding as torrential rain accompanied the storms, as was southbound 75 ramp to eastbound 94 due to water over the road the state transportation department said. About a foot of water accumulated on the northbound ramp.

Elsewhere, cars spun out on the slick freeways.

The weather service issued a severe thunderstorm warning until 12:45 a.m. for Monroe and Lenawee counties. A warning for Wayne County expired after midnight, leaving a watch in effect for southeast Michigan until 2 a.m.

There was a “strong possibility of high winds and hail” in Metro Detroit until 2 a.m., said Dan Thompson, a meteorologist at the National Weather Service’s White Lake Township office.

“The northern lower part of Michigan was pretty hard hit earlier today, but we still have the threat of winds … coming our way,” Thompson said. “We may also see hail an inch in diameter in size.”

The line of thunderstorms earlier had knocked out power to thousands in the Thumb and northern Michigan, snapping trees and briefly closing the Mackinac Bridge after a recreational trailer overturned.

State police at the St. Ignace post said the Mackinac Bridge was shut down briefly Sunday morning after a trailer fell over on its side due to high wind gusts. No injuries were reported. Winds were reported at 65 mph.

Consumer’s spokesman Dennis McKee said repair crews have been at work since late afternoon but had their hands full. He said crews were on 24-hour cycles but he could not estimate when power would be restored to all areas.

McKee said the outages began “from Traverse City to Tawas” and then moved south with the storms, with 60 mile an hour winds or more knocking down tree limbs and downing power lines. The outages, initially clustered in rural northern Michigan, soon spread to more populated communities such as Grand Rapids, Midland, Saginaw, Bay City and Flint, he said.

Consumer’s advises residents to stay clear of any downed power lines and immediately report them to (800) 477-5050.

As storms rolled into Michigan’s thumb region, forecasters said southeast Michigan could be vulnerable to high winds through early Monday.

The National Weather Service warned people about dangerous swimming conditions up and down the Lake Michigan coast, with waves as high as 6 feet. Near Lake Huron, campers had to dodge falling branches at Harrisville State Park.

“A strong wave of storms and high winds — between 60 to 65 miles an hour — blew through from the tip of the Mitten to middle of the state,” said Leix. “Now we are in the second wave which might bring some more problems.”

A large branch shows signs of charring where it was struck by lightning in the Cadillac area. (Photo: Matt Johnson / Special to The Detroit News)

“People should really pay attention tonight,” she said. “Have a weather radio, especially at night.”

Metro Detroit remained clear and sunny Sunday afternoon. Meanwhile, storms passed through the Saginaw area and into the Thumb, with winds causing some damage.

Temperatures will drop into the mid-60s Sunday night and warm back up Monday to around 80.

The rest of the week will see some cooler temperatures in the 70s. It should remain mostly dry during the week with some chance of rain on Thursday, she said.