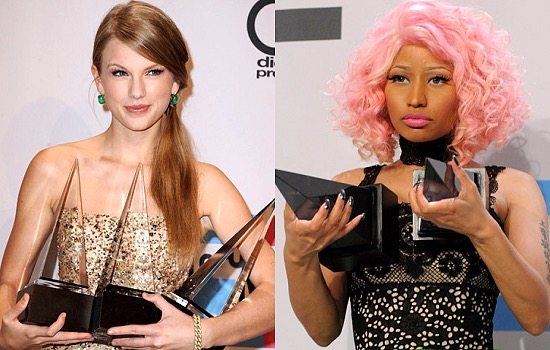 Look what you started! Nicki Minaj may have just been venting her frustrations against MTV on Twitter on Tuesday, July 21, because she received only two 2015 VMA nominations for “Anaconda,” but her gripes on social media quickly turned into a series of funny misunderstandings with fellow nominee Taylor Swift and Kim Kardashian.
After the nominees were revealed earlier in the day, the “Only” performer made clear to the network that while she appreciates the recognition she did receive, she feels she should be up for more than three awards. (In addition to the two nominations she received for “Anaconda,” she and her “Bang Bang” cohorts Jessie J and Ariana Grande are contenders for “Best Collaboration.”)

Nicky Minaj via Twitter: Hey guys @MTV thank you for my nominations. 😘😘😘 Did Feeling Myself miss the deadline or…?

Minaj also took issue with the fact that while “Anaconda” is up for “Best Hip Hop Video” and “Best Female Video,” it missed out on bigger categories like “Video of the Year.” The nominees for that honor include Swift, Beyonce, Ed Sheeran, Mark Ronson ft. Bruno Mars, and Kendrick Lamar.

Nicky Minaj via Twitter: If I was a different “kind” of artist, Anaconda would be nominated for best choreo and vid of the year as well. 😊😊😊

Nicky Minaj via Twitter: Ellen did her own anaconda video and did the #choreo lol. Remember her doing that kick 😩. Even mtv did a post on the choreo @MTV remember?

To back up her point, the Pink Friday rapper retweeted several fan complaints about the perceived snubs, including some that made note of how “Anaconda” broke the Vevo record for most views in a 24-hour period.

Minaj’s tweets caught the eye of Swift, who received a “Video of the Year” nomination for her star-studded “Bad Blood” video. In response to the “Bang Bang” hitmaker’s complaints, the “Style” songstress wrote:

If your video celebrates women with very slim bodies, you will be nominated for vid of the year 😊😊😊😊😊😊😊😊😊😊😊😊😊

@NICKIMINAJ I’ve done nothing but love & support you. It’s unlike you to pit women against each other. Maybe one of the men took your slot..

Minaj followed up with:

Huh? U must not be reading my tweets. Didn’t say a word about u. I love u just as much. But u should speak on this. @taylorswift13

@NICKIMINAJ If I win, please come up with me!! You’re invited to any stage I’m ever on.