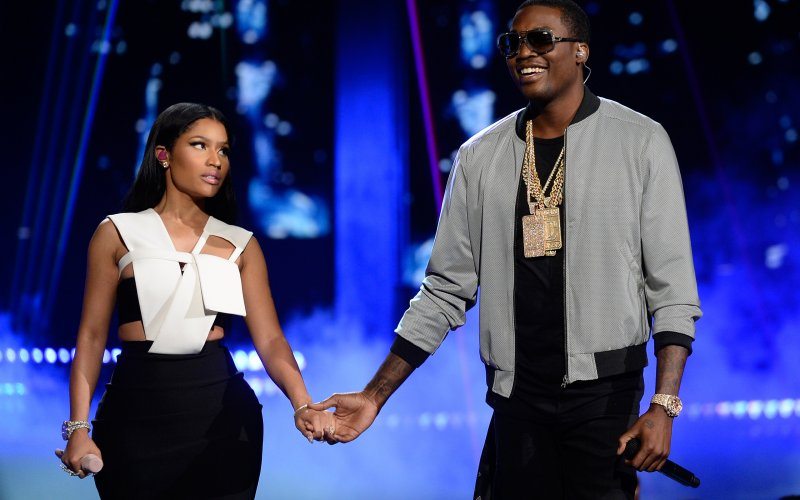 According to MediaTakeOut, Nicki Minaj has decided to part ways with her boyfriend/opening act, the 28-year-old rapper Meek Mill. “Nicki reportedly broke it off with Meek last night,” says the tabloid, but “the two plan on fulfilling the rest of the tour obligations together.” The site claims to have spoken to one of Nicki’s best friends who broke the news, telling them, “It’s complicated. I think they took their relationship too far, too fast.” Nicki’s pal refused, however, to say whether or not her boy-toy’s recent war of words with Drake had anything to do with the split. Nicki Minaj’s representatives could not be reached for comment.

In case you haven’t logged on to any social media sites in the last week-plus, back on June 21, Philly’s Meek Mill unleashed a Twitter tantrum, accusing his former pal Drake of employing the services of a ghostwriter on his rap songs—including their recent collaboration “R.I.C.O.” off Meek’s album Dreams Worth More Than Money.

Stop comparing drake to me too…. He don’t write his own raps! That’s why he ain’t tweet my album because we found out! ?

Meek went Twitter-crazy because it seems he was upset that Drake hadn’t promoted their song (or Meek’s album) to his 25.4 million Twitter followers. But it struck those who’ve monitored their relationship over the years as particularly odd, since Meek wouldn’t be where he is without Drizzy, who let a then-unknown Meek open for him on his 2012 “Club Paradise” tour, guested on Meek’s first single, “Amen,” and even donated $75,000 to Meek’s former high school in Philly to build a recording studio back in 2013. Anyways, Meek’s allegations sent the rap world into a tizzy, with everyone from Rick Ross to Chris Brown to Azealia Banks weighing in on the beef. DJ Funkmaster Flex, ever the opportunist, butted into the fray, releasing a series of “reference tracks” composed by Drake collaborator Quentin Miller—evidence, it seems, that Drake used a ghostwriter on “R.I.C.O.” and a few other tracks. Miller, however, denied being Drake’s ghostwriter, penning an essay on his Tumblr about how grateful he was when Drizzy plucked him from obscurity—he was working in a bakery—to write some songs with him, saying, “I am not and never will be a ‘ghostwriter’ for drake. Im [sic] proud to say that we’ve collaborated .. but i could never take credit for anything other than the few songs we worked on together.” After the tweetstorm, Meek was forced to apologize to Nicki onstage—again, he’s currently one of the opening acts on her “Pinkprint Tour”—saying, “I want to give a special apology/shout-out to Nicki Minaj for my crazy ass goin’ crazy on Twitter.”

Then things began to heat up between Drizzy and Meek, with Drizzy releasing a pair of diss tracks aimed at Mr. Minaj—“Charged Up” and “Back to Back.” The latter was particularly brutal, containing several nods to Meek riding his far more famous girlfriend’s coattails: “Is that a world tour, or your girl’s tour?” Drake raps on the track, adding, “And shout to all my boss bitches wifin’ niggas!”

The song went very viral, collecting over 14 million listens at time of writing, and spawning a series of hilarious memes of Drake clowning Meek under the Twitter hashtag #BackToBack:

Late Thursday night, after a week in the lab, Meek finally released his rebuttal, “Wanna Know,” which the Internet greeted with a collective shrug. Shortly after its release, an enterprising individual took it upon him/herself to manipulate Meek Mill’s Wikipedia page to the following: 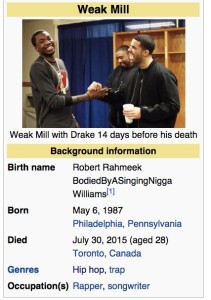 But Drake’s response on Instagram really said it all: