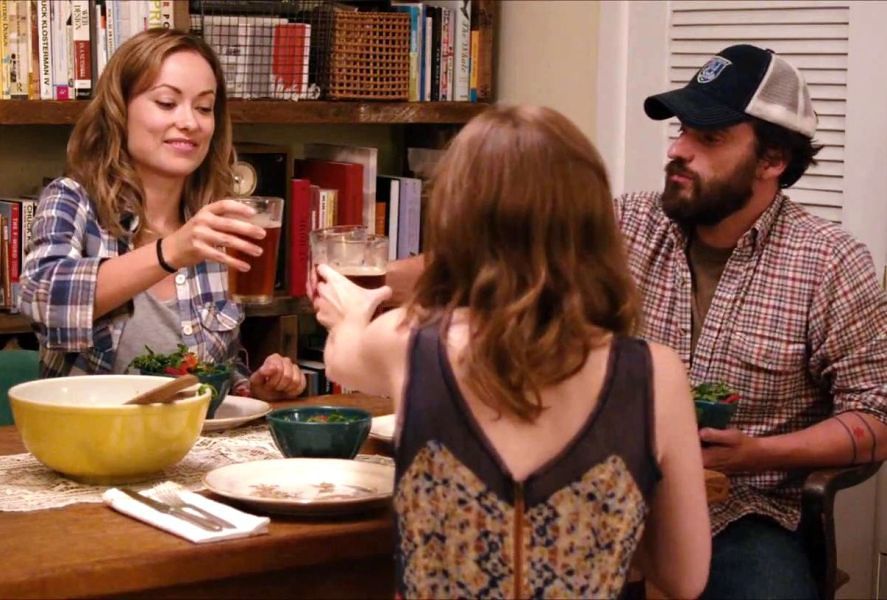 Olivia Wilde has done her fair share of drinking on the job.

In an exclusive sneak peek of her upcoming interview on Off Camera with Sam Jones, Olivia Wilde shares a behind-the-scenes look at filming her brewery-set 2013 film Drinking Buddies.

“We were hammered the entire movie because it was real beer, because beer on that set was cheaper than water,” she tells Jones. She also says that when Anna Kendrick showed up two weeks into the filming process, this authenticity was a big surprise.

“She’s about this big,” Wild says, gesturing to illustrate Kendrick’s diminutive stature, “and she sat down to do the first scene and took a huge gulp of beer, not realizing it was real, and was like instantly hammered.”

Wilde adds, “She was like, ‘What’s happening? What are you guys doing?’ and we were like, ‘Oh, we forgot to tell you – the beer’s all real and everyone’s drunk. It’s 10 a.m., welcome to Drinking Buddies.’ ”

Wilde, 31, also talks about her lifelong love of Saturday Night Live – she’s even engaged to SNL alum Jason Sudeikis – and how her mother encouraged her to follow her dream of being on the iconic show.

“My favorite thing when I was young was to go to SNL … I thought, you know, what they do is the ultimate. I just loved watching them perform,” the mother of Otis, 1½, says. “I said to my mom, ‘I wanna do that.’ ”

And although many parents would brush this off as a childish wish, Wilde says, her mom took her seriously.

“She said, ‘Okay, you should study improv. You should work at Second City – Second City’s where a lot of these people trained – you have to work very hard and you have to learn from them. And then you audition and then maybe you get cast on the show and then you have to keep working hard,’ ” Wilde remembers.

“I remember this conversation now and I’m in awe of my mom for speaking to me like an adult, taking my dream seriously.”