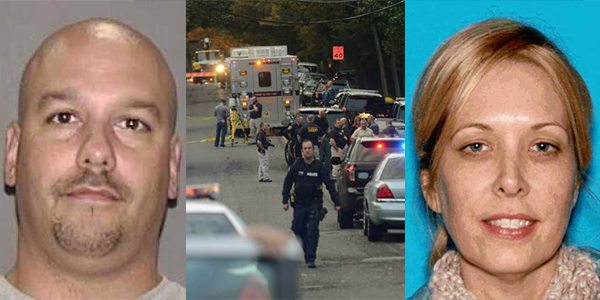 MIDLAND PARK – A 48-year-old woman was fatally stabbed by her estranged boyfriend when she pulled into her driveway on Thursday afternoon, authorities said.

Bergen County Prosecutor John L. Molinelli identified the woman as Suzanne Bardzell, who owns the home, a Cape Cod-style house in the 700 block of Godwin Avenue.

Molinelli said the attacker, identified as Arthur J. Lomando of Centerreach, N.Y., escaped to New York City, where he threw himself in front of a subway train at Amsterdam and St. Nicholas avenues. Lomando was rushed to Harlem Hospital, where he was treated for head and leg injuries, the prosecutor said.

Lomando is a former employee of the New York City Police Department who had been “separated” from the department for “quite a few” years for “physical and/or mental reasons,” Molinelli said.

Molinelli said Lomando left the machete-like knife that was used in the attack at the scene of the killing.

When police arrived at the scene, Bardzell was already dead inside the vehicle, and the engine was still running, Molinelli said.

Molinelli said Bardzell had returned home in her black Volkswagen SUV at 3:26 p.m. when Lomando confronted her and smashed the driver’s-side window of the vehicle and attacked her with “a very large machete type of knife, striking her several times.”

Molinelli said police arrived at the scene in response to a 911 call, but it was not immediately clear who had made the call.

The prosecutor said Bardzell and Lomando had met online three years ago and had been dating since then.

Molinelli said Bardzell had recently sought and received an order of protection against Lomando, after repeated earlier incidents of domestic violence.

Earlier this month, Molinelli added, police mounted an intense manhunt for Lomando, losing him in a chase along railroad tracks in the area.

“We are in the process of issuing arrest warrants for murder, possession of weapon, and violating the terms of a restraining order,” Molinelli said.

Bardzell was a special-education teacher in Teaneck, the prosecutor said.

Neighbors, who gathered on the street as police officers from multiple agencies swarmed through the area, said that police had been called to the home in the past month, and at one point a police patrol was assigned to keep watch over the residence.

“It’s extremely shocking,” said a neighbor, Mike Nothofer, who lives just across the municipal line in Wyckoff. “You come home to all this police activity to find that something like this has happened.”

Police from nearby Waldwick and Ridgewood as well as detectives from the Bergen County Sheriff’s Office and dogs from the county K-9 unit joined officers from Midland Park in combing through the neighborhood as a state police helicopter hovered overhead.

Residents in the neighborhood reported in social media postings that they had received automated telephone calls from the town that because of an investigation Godwin Avenue would remain closed, and all traffic was requested to stay away from the area.

In addition, all sports practice sessions were canceled and participants were sent home, residents reported. The residents who posted the comments said the calls made no mention of a specific suspect.

Access to the entire neighborhood was limited, as police closed off Godwin Avenue at Midland Avenue.