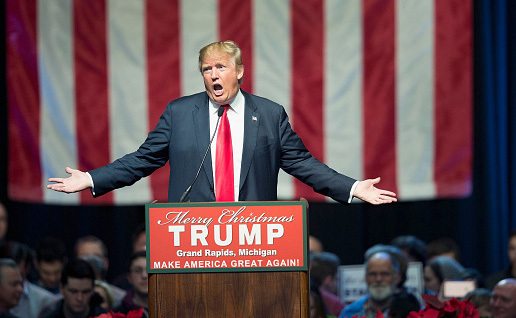 Donald Trump used some pretty strong language to describe Hillary Clinton’s loss to President Obama. He told a crowd that she  “got schlonged” by Barack Obama in the 2008 presidential race. “Got schlonged” Trump said, as if he was a 1940’s Yale frat boy talking about the opposing rugby team. Even that would be horrendously offensive. Because if anyone thinks that the act of “getting schlonged” is an act rightfully painful, or a sign of weakness, or violent of any kind, they’re most likely a misogynist rapist. Which Trump (basically) has been accused of.

He said, “Even a race to Obama, she was gonna beat Obama. I don’t know who would be worse, I don’t know, how could it be worse? But she was going to beat — she was favored to win — and she got schlonged, she lost, I mean she lost.”

Look it doesn’t matter where Hilary “got schlonged” whether it was on the ground or all around. Tump could have meant she got schlonged in a box, she got schlonged by the rocks, she got schlonged here, there or anywhere—It doesn’t matter! What matters is that Tump is a likely candidate to become the president! And that a ludicrous expression for him to be saying! Let alone for him to use to describe a woman who made it that far in a political campaign for the most powerful position in the world! And that same woman is choosing to go at it again! If anyone is “getting schlonged” it’s all of us who are currently not The Hillary Rodham Clinton because she is a rock star, emphasis on the rock, of a human being.

Trump’s spokesperson Katrina Pierson went on saying, “Are we really talking about the definition of a word? …What does schlonged mean then? Why don’t you tell me what schlonged means.”

Well to be perfectly Frank (And nsfw—take heed) it means to get f—cked, specifically in a violent manner. Which is exactly the way Trump does it allegedly (so sorry for that image). To get schlonged implies you were assaulted by a man with a penis. If you really want to know how horrid of an expression it is, look it up on Urban Dictionary. You may be familiar with what “getting schlonged ” if you’ve ever played X-Box live, went to a frat house, have an idea of what BDSM implies, watched terribly degrading pornography, or gotten really drunk with a Chassidic Jew.

Donald Trump is the republican front runner to be the president of the United States. What is he going to say when we finally beat ISIS? “My fellow Americans, this is huge and fantastic news… We’ve finally rammed ISIS off the map. We’ve officially received word that they have admitted that they are total losers. And we will continue to full on plow them.”

His complete lack of respect for woman wasn’t only painted by the colorfully phallic language he used. He also called her “disgusting” because she went to the bathroom. Much like when he called a woman disgusting for breastfeeding. He said Hilary’s bathroom break at the Democratic debate was simply just too “disgusting” to talk about. For a man who owned a competition based solely on objectively judging women from every angle, he isn’t too keen on just what women actually are.

While Hillary Clinton’s campaign team has refused to comment on this recent attack, Jeb Bush sure has jumped in. “She’s great at being the victim,” he told reporters after a town hall event. “This is what she loves doing.” Yes, by not giving into demanding drama and being the bigger person in withholding a response, Hillary Clinton sure does love that pitty. It just simply doesn’t make sense as to why Jeb Bush even felt the need to speak on Hillary’s behalf, start drama, butt-in where he wasn’t needed, or start rumors. It’s confusing as well as why Donald even felt the need to be cruel, bring up something from seven years ago, or argue about something that he wasn’t even a part of… I guess, to use Jeb and Donald’s out-dated way of putting things… they’re acting like total girls.

Hispanics Slam Hillary Clinton ‘She Is Not Our Grandmother’

Karina Rose is a young writer from Southern California currently contributing to and running online blogs ranging from entertainment, news, to creative arts. Working for and interning with filmmakers and social media personalities she hopes to continue sharing her unique perspective and original content.